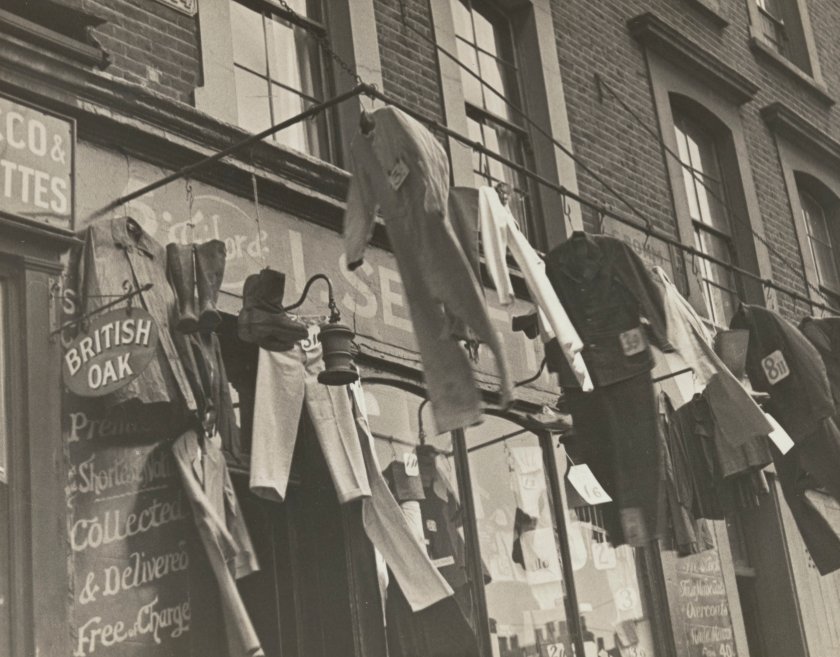 The pioneering Argentine photographer and filmmaker Horacio Coppola (1906-2012) was a key Modernist figure. He was one of ten siblings born to Italian immigrants in Buenos Aires at a time when photography was only an emerging art form. He travelled to Europe in the 1920s and 1930s, where his early experiments with photography began to take on a Surrealist edge.

Coppola is the subject of a new retrospective at New York’s MOMA, alongside his wife German-born Grete Stern, also an artist.

Coppola enjoyed walking the streets of London, waiting for moments of Surrealist uncanniness to appear. In this photo, taken in London in 1934, clothes and shoes for sale outside a shop swing in the wind, giving the strange sensation that they are being worn.

In another photo in the exhibition, also taken in London in 1934, he photographed a display of various antiques at a flea market in the city, including the reflections of passers-by in the mirrors. Viewed more closely, the reflection of a sculptural bust can be seen in the mirror too, alongside the reflection of a real person, adding to the strangeness of this scene. Coppola liked to explore a number of Surrealist techniques in his London photos, including doubling, chance happenings and surrogates.

From Bauhaus to Buenos Aires: Grete Stern and Horacio Coppola is on at MOMA, New York, until October 4th 2015. For more about exhibitions worldwide, read the latest issue of The Kurios Magazine.