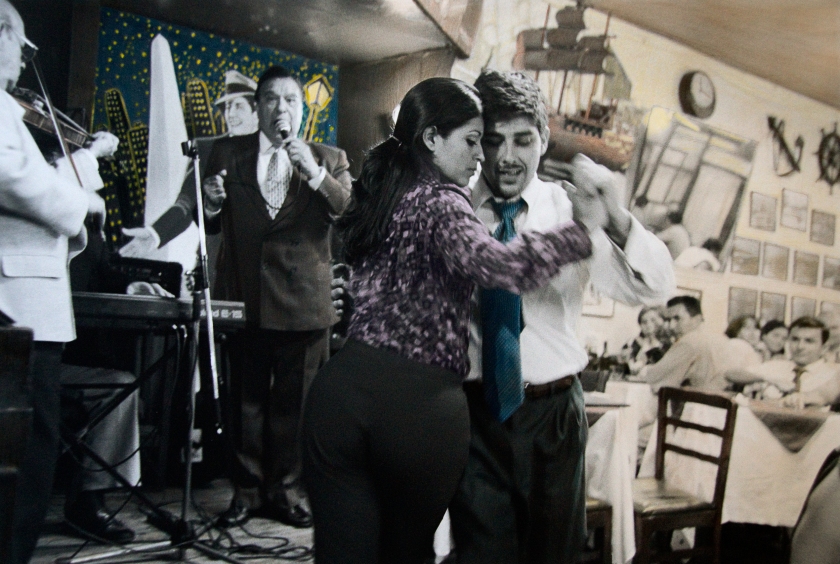 Chilean photographer Leonora Vicuña (b.1952) creates timeless, lyrical images that capture nightlife in her native Santiago as well as in Paris and Barcelona. Her photos immortalize these nocturnal scenes, giving us a rich array of bohemian characters, including musicians, waiters, transvestites and vagabonds.

During the dictatorship of General Pinochet in the 1970s and ‘80s, Vicuña spent some years living and working in France. She was one of the founders of the AFI, the first association of professional independent photographers in Chile, which fought for the restoration of democracy in the 1980s.

Vicuña, who is also a Professor of Photography in Santiago, has been employing colour pigments and pencils on the surface of her silver gelatin prints since the late 1970s to bring her images of popular culture to life. In this way, she is able to add a personal touch to the images and recall the atmosphere of the original scene.

The photos are a nostalgic, personal interpretation of everyday activities – playing cards, dancing, having a drink at a tapas bar – that take place in public spaces. They are masterly versions of family photo album snapshots, with the energy, dynamism and spontaneity of the original scenario intact.

As well as photography, Vicuña has experimented with poetry, animation and cinema. She is a member of the artist collective known as Grupo 8. The daughter of two writers, she studied social sciences in the University of Sorbonne in Paris, then photography at the Escuela de Foto Arte de Chile in Santiago.

Vicuña’s work has been exhibited internationally since 1980 and is included in public and private collections around the world. She has been the recipient of various awards and grants including the Fondart Grant from the Republic of Chile, twice in 2001 and 2006, and The Altazor Award of the National Arts, Chile, in 2010.

Vicuña is profiled in the November/December 2015 issue of The Kurios. Get your digital issue here.